Alexander The Great: The Greatest Of All…

One of the most fascinating lives of antiquity was undoubtedly that of Alexander the Great, Macedonian king and one of the greatest conquerors in history.

He was born in August 356 BC. He was the son of King Philip II of Macedonia and Princess Olympias, of the royal family of Epirus. Although the succession to the throne corresponded to a son that the king had had with a mistress, he was designated as the future heir, so he was educated as such from birth.

From an early age he showed an interest in literature, especially epic poems that told the incredible stories of the heroes from whom he was descended.

His tutors were his mother’s relatives, so his father distrusted them. Because of this, he decided that Alexander should continue his education at an academy in Mieza.

At the end of his education he was under the tutelage of Aristotle, who instructed him in knowledge such as geography and medicine.

Due to the close relationship that arose between the two, Aristotle’s way of thinking would greatly influence Alexander’s character.

But he also had a close relationship with some military men who instructed him in his military training. One of them, Cleitus, was assassinated by Alexander himself when he opposed Alexander’s comparison of himself with the gods.

It was one of the first signs of the difficult character of the monarch.

However, relations with his father were not very good, so when Olympias had to go into exile, Alexander accompanied her until the end of the year, at which time he returned to court and reconciled with his father.

He participated in his first military campaign when he was barely 16 years old.

Years later he would lead the cavalry troops against the Greeks during the battle of Chaeronea. From this moment on he was considered the legitimate heir of his father.

But something tragic was about to happen, because to try to fix the problems that had caused the exile of his wife, the king decided to marry one of his daughters to his brother-in-law Alexander of Epirus.

During the ceremony, Philip is assassinated, so Alexander is appointed as monarch in 336 BC.

Despite the military support, after his accession to the throne many of the court advisors were against the new king, so Alexander decided to get rid of all those he considered dangerous, always supported by his mother.

One of the first problems he had to face was the rebellion of the Greeks, who did not want to be under Macedonian influence. Alexander responded by razing the cities of Thebes and Athens, the main centers of the revolts.

Having solved this, he decided to continue with the expansionist policy that had characterized his father. Following the ideas of his mentor, his first target was the Persians in Asia, long-time enemies.

To gain the support of the Greek cities, he claimed that conquering those territories would solve most of the problems the people had, in addition to taking revenge for the affronts committed at the hands of the Persians.

He departed from Pella, capital of Macedonia, in the spring of 334 BC. In spite of the great power of the Macedonian army, the Persian army was infinitely superior. Nevertheless, Alexander would achieve a great victory. His first victory was the battle of Granicus in June of the same year.

We must remember that upon entering Asia Minor, Alexander’s mentality was that the ancient Greek cities that had been colonized by the Persians would welcome him with joy and optimism.

But nothing could be further from the truth. These cities had prospered greatly economically and saw the Macedonian troops as a threat.

The following year he would reach the city of Gordion. Thanks to the legend that existed in the city, Alexander had one more reason to justify his enterprise.

It was said that if someone untied the knot of the yoke of the chariot of Midas he would be the owner of all Asia, so it is said that Alexander cut it, since his objective was to conquer the continent.

That same year the battle of Issos took place, in which the Persian troops were commanded by King Darius III himself.

Despite the Persian superiority, it was again Alexander who won the victory thanks to a military error and the bravery of the Greeks.

The family of the Persian king was captured.

Once he arrived in Damascus, he seized the royal treasury, which would provide the necessary funds for Alexander’s army.

Because of this, Darius came to an agreement with the Greek conqueror. In addition, to try to further strengthen good relations, the monarch would maintain a close relationship with the noblewoman Barsine, with whom he had a son, Heracles.

After this, he set out again, but this time towards the territories of Phoenicia and Palestine. In the cities of Tyre and Gaza he met with great resistance and they were only conquered after long sieges, after which their inhabitants were sold into slavery. 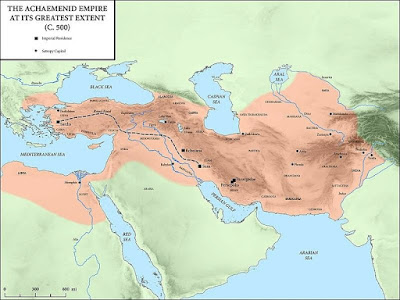 He then went to Egypt, where he was received as a hero thanks to his victories over the Persians. There he devoted himself to rebuilding temples and worshipping the gods of the Nile valley, thus gaining the favor of the people.

He named himself pharaoh and founded the well-known city of Alexandria.

After this, he decided to take up his fight against the Persian Empire again. On his way he met hardly any resistance.

Darius offered him a large amount of money in exchange for his family and control over some territories, an offer that was rejected.

Because of this rejection, Darius decided to attack, meeting the Macedonian army in October 331 BC at the battle of Gaugamela, where Alexander managed to break the enemy lines and the Persians fled.

Seeing this defeat, the Persian nobility stopped supporting Darius and assassinated him. 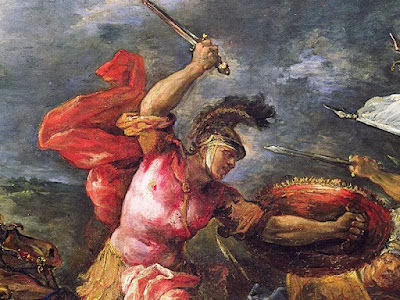 He then directed his steps towards Babylon where he was received with great honors. After passing through its territories, he decided to go to Susa and Persepolis.

The latter was burned and thanks to the royal treasure he was able to hire mercenaries for his army. Arriving at the city of Ecbatana, he decided to free the Greek troops of the Corinthian League and to continue without them.

His next objective was the cities of Bactriana and Sogdiana. It was a tough and complicated journey due to both natural elements such as the weather and the continuous attacks of the mountain tribes.

This made the troops demoralized, so they began to form plots against the king.

The discontent of the troops was more evident when he decided to begin a policy of alliance with the Iranian nobility and after his marriage with Princess Roxana.

He reached the Jaxarter River in 328 BC, after which he decided to set out for India. He included Persian troops in his army to reinforce it, in addition to allying himself with Indian leaders.

After his victory he continued on his way to the river Hyphasis, where he decided to follow the course of the river to the city of Patala. There the kings who had joined him rebelled against him.

In addition, the dissatisfaction of his troops for so many years of fighting was evident.

Against this background, Alexander decided to organize the return to Macedonia, but not before telling the control of the territories through the creation of cities called Alexandria.

During the following years countless purges would be carried out among his collaborators, such as the assassinations of Philotas and Parmenion, two of the best military men he had.

There were continuous revolts among the troops due to fatigue and the long time spent away from their homes.

In 324 BC, during the Olympic Games, he announced that it was mandatory for the exiles to return to the Greek cities. This measure was a threat to the political and economic stability of his kingdom.

As a result, the inhabitants began to see him in a different light, as a tyrant and not as the great king they had considered him to be at the beginning of his reign.

On June 10 or 13, 323 B.C., at the age of 33, Alexander died in Babylon. There are several hypotheses about his death, at first it was pointed to a poisoning by his teacher Aristotle.

However, it is also attributed to natural causes such as malaria.

After his death, the kingdom disintegrated into several territories ruled by his generals.