On November 15, 1891, in Heidenheim (Germany), one of the most renowned and important military men in history was born: Erwin Rommel.

His life was always dedicated to the army and the servitude of his country. He participated in both World Wars but ended up committing suicide because of his disagreements with Adolf Hitler.

Since childhood he was a very extroverted and kind child. He was passionate about sports and a remarkable student. On July 19, 1910 he joined the 124th Infantry Regiment of the German Army as a Cadet.

After being promoted first to Corporal and later to Sergeant, Rommel entered the Kriegsschule (Military Academy) in Danzig. After his time at the academy, he served as a lieutenant with the mission of instructing the new troops.

In this first stage, he began to stand out for his enthusiasm, his didactic ability and his serenity when it came to making decisions.

The outbreak of the First World War transferred him to the French front between 1914 and 1915 as a member of one of the battalions in charge of executing the Schlieffen Plan.

Following the success of the mission, he was promoted to first lieutenant and given leadership of a company. Here he began to demonstrate his skills as a strategist: his section had the fewest killed and wounded.

The course of the war took him from one place to another, where he always demonstrated his quality as a soldier and, above all, as a person. One of the traits that would characterize him all his life was his nobility towards his adversaries.

He treated his enemies with chivalry and was concerned about his health. His successes eventually earned him the military merit medal and promotion to Captain.

But, from 1917, he was transferred to the General Staff and spent the rest of the war performing administrative functions.

With the German defeat and demilitarization, Rommel did not join the Freikorps, but was one of those chosen (for his military merits) to remain in the army of the Weimar Republic.

On January 31, 1933 he was promoted to Major and placed in command of the 3rd Battalion of the 17th Infantry Regiment, at which time he met Hitler.

For the rest of the 1930s, he commanded training units.

He was in charge of training new soldiers, especially after the approval of the rearmament authorized by Adolf Hitler. In addition, during this period he rose to the rank of colonel.

It was a progression in which Rommel showed himself to be very independent of the Nazi command, even criticizing the military teachings carried out by the Hitlerjugend (Hitler Youth).

But even so, on August 23, 1939, he climbed even higher in his military career, receiving the rank of General.

Hitler saw Rommel as a great strategist, so he assigned him as head of security at the Führer’s headquarters. 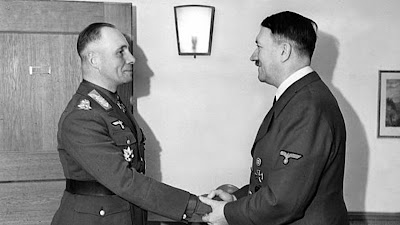 World War II made it possible for Rommel to fulfill one of his dreams: to take command of the Panzer Division. This happened in France in 1940. He acted quickly and effectively, taking the Blitzkrieg (Blitzkrieg) to the extreme.

He always stayed with the soldiers on the front line to get a closer look at how he could guide the situation to victory.

Starting in 1941, after instructing the Italian army, he began his campaign in North Africa. He began an offensive in Libya that the Allies would be unable to stop.

The speed with which he advanced and, above all, the effectiveness with which he did it, led him to acquire the nickname: “The Desert Fox”. The Allies were rotating generals to see if any of them could stop Rommel, but his advance was impeccable.

It seemed that nothing could stop the German army until the figure of Bernard Montgomery, the new commander of the British army, appeared. Rommel’s aim was to conquer Egypt.

And he came close to doing so, but Montgomery stopped him at El Alamein twice in 1942. Lack of supplies and Montgomery’s own skill were decisive.

It was then that he received the Kommandobefehl (Command Order) from Hitler. In that missive, all captured Allied commandos were to be executed.

As it turned out during World War I, Rommel was an outstanding military man but, above all, a remarkable person, so he rejected the Führer’s order and threatened anyone who wanted to carry it out within his battalion.

Here Rommel’s doubts about Hitler’s leadership of Germany began to emerge. These were confirmed when he saw how little support he received for his plan to stop the Normandy landings on June 6, 1944, after he had been transferred to France to prevent an Allied invasion.

Although he came very close to defeating the Americans, Rommel was seriously wounded and withdrew from the battle.

From this point on, Rommel already knew of Hitler’s inability to lead the country. He came out in favor of the “conspirators”, who attempted an attempt against the Führer (Operation Valkyrie).

Initially, his idea was to make his regiment surrender so that the Allies could gain access to Berlin and end the war. But he thought it would be easier if he supported the Operation Valkyrie movement.

Many theories have been written about Erwin Rommel’s involvement or abstention in Operation Valkyrie but, in any case, he was disowned by the German High Command, especially by Hitler.

The most widespread version states that the Führer threatened to kill his family if he did not commit suicide. On October 14, 1944 he was found dead in Ulm. Officially, his death was attributed to a stroke.

That was the end of probably the most respected military man on all sides during World War II.

Erwin Rommel was a person who saw war as an art, was against involving the civilian population and always respected his adversaries. He fought side by side with his soldiers on the front line and distanced himself from the aristocratic Prussian officers that abounded in the German High Command.