Christopher Columbus: One of The Most Influential Figures in History

Christopher Columbus was almost certainly born in Genoa on October 30, 1451 and is one of the most important figures not only of the Modern Age, but of the history of mankind.

He was the son of Domeneghino Colombo and Susana Fontanarossa and had two brothers, Bartolomeo and Diego.

Although his father was a wool carder, among his relatives there were sailors who, since his childhood, awakened his interest in this work, so he was trained for this purpose.

The sources credit him with talent in his studies, he knew as much as the teachers who taught him geography, mathematics, navigation and astronomy.

For his profound knowledge and courage, the Republic of Genoa used Columbus in the Mediterranean attacks against Venice.

However, Columbus’ ship was shot down in one of his confrontations and the entire crew drowned, but the Genoese managed to save himself and swam to the coast of Portugal.

After several days of rest, he set sail for Lisbon, where he was already known by the sailors of that country.

The diaries and maps of this captain awakened in Columbus an idea, he believed that the world was round and that beyond what was known so far there were other lands.

Relying on this idea, he thought that if he set sail from Europe in a westerly or westerly direction across the ocean, he would reach the other side.

After several refusals and with the passing of the years, the Queen of Castile, Isabella I the Catholic, provided him with everything he needed to set out on his expedition, although his resources were certainly limited.

Columbus had three ships: the Pinta, the Niña and the Santa María, which first set sail for the Canary Islands.

After a voyage of two months and nine days, at 2:00 a.m. on October 12, 1492, from the Pinta caravel they sighted land, arriving at Guanahani Island, the site of the first landing and an island belonging to the Antilles archipelago (Bahamas).

He baptized the island with the name of San Salvador and continued his voyage, also reaching several islands of the Antilles, which he named Santa María de la Concepción, Fernandina and Isabela (today’s Cayo Samaná, Long Island and Crooked), Cuba, which he named “Juana” and Santo Domingo, which he named “La Española”.

On December 25 of that same year, the Santa Maria ran aground on the island that is now Haiti, becoming useless. With its remains, a fort was created, which was baptized “Fort Navidad”.

On January 16, 1493, Columbus left Hispaniola with the Pinta and the Niña, leaving as an order to the Castilians who stayed there to abide by what the cacique Guacanagari said without leaving their domains.

On his return voyage and due to a storm, Columbus had to dock in the Azores where he was taken prisoner.

Once freed, another storm diverted him to Lisbon, where he had an interview with the King of Portugal, John II. From there he sent a letter to the Catholic Monarchs to inform them that he would arrive on March 20. 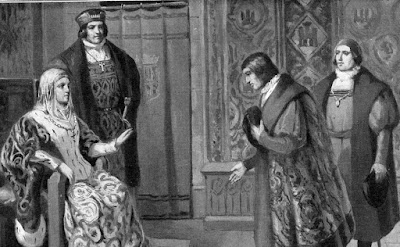 On March 20, 1493 Columbus arrived in Seville where he received a letter from the King and Queen urging him to go to Barcelona to meet with them, where he was entertained and from where the anecdote arose that, once he bowed to the King and Queen, they ordered him to stand up and sit on a chair they had prepared for him, as a sign of importance, honor and respect.

Between 1493 and 1496, Columbus made his second voyage to continue his exploration, reaching Cuba, Puerto Rico and Jamaica. He had to return to Spain due to accusations of dissatisfaction with the way he governed Hispaniola.

On his third voyage between 1498 and 1500 he discovered Trinidad, but an uprising by the colonists forced his removal as governor and he was sent back to Spain as a prisoner, in chains, by order of the new governor Francisco de Bobadilla.

In 1502 he began his fourth and final voyage, attempting to find the final passage to the Indies.

Columbus was forbidden to be near Hispaniola, which led him to travel and discover the Central American coasts of Honduras, Costa Rica, Nicaragua and Panama.

On this voyage there was a storm that sank his four ships and after months of waiting in Jamaica, a ship from Hispaniola came to his rescue and that of his 110 men, setting out on a new voyage back to Spain.

Upon his arrival he was informed of the death of Isabella of Castile and presented himself before Ferdinand the Catholic, who received him coldly and without attending to his requests for rewards for all his discoveries.

King Ferdinand only gave him a villa with other possessions and he retired to Valladolid, where he died on May 20, 1520 at the age of 70.

His remains were buried (after spending some years in the Convent of San Francisco in Valladolid and in the chapel of Santa Ana de la Cartuja in Seville) in the Cathedral of Santo Domingo, and transferred to Havana when the French conquered the island in 1975.

After the Cuban War of Independence in 1898, his remains were transferred to the Cathedral of Seville, where they still rest.