The General Feared By The Nazis: George Patton

George Patton was one of the most feared military men by the Axis troops during World War II. But his career goes beyond that, as it was marked by insubordinations and very controversial decisions. He was in charge of liberating North Africa, Italy, France and Czechoslovakia during the conflict against Nazi Germany.

Patton was born on November 11, 1885 in San Gabriel (United States) into a family with a long military tradition. To continue this heritage, he was enrolled in the Virginia Military Institute. There he studied for a year until he entered the United States Military Academy at Westpoint. He spent five years at the academy and graduated in 1909. Throughout his childhood and adolescence he showed a great interest in classical literature and military history.

From here he would begin his military career. With the entry of the United States in the First World War, Patton was promoted to Captain and was assigned to France. There he began to show great interest in tanks, so he was placed in command of a unit of the newly created Tank Corps.

His participation in the Battle of Cambria, where tanks played a very prominent role, and in the Meuse-Argonne operations, led to his appointment as Colonel. From then until the outbreak of World War II, he devoted himself to improving the skills, tactics and structures of American tanks.

The Axis offensive on the Western countries finally provoked the irruption of the United States in the war and, therefore, brought Patton back to the other side of the ocean. As Major General he landed in 1942 on the North African coast to reinforce Operation Torch. After some initial defeats, Patton’s tactics began to emerge. He was promoted to Lieutenant General and in March 1943 had to devise a plan with Bernard Montgomery in order to defeat Erwin Rommel. The relationship between the two Allied generals was rather bad, as Patton saw Montgomery as too inflexible in adapting the plan to reality.

The rivalry between the two would continue during the Italian Campaign, where each was assigned the mission of liberating a part of the peninsula. Patton advanced much faster than Montgomery but left behind a great deal of internal problems: populist speeches, massacres against prisoners of war and exacerbated discipline. For these reasons he was temporarily relieved of command of the army. The Germans, oblivious to this issue, thought that the Americans were preparing an offensive through southern Italy, the Balkans or Calais (France). 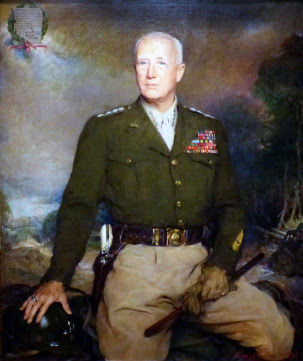 But the Allied offensive took place over Normandy and the Axis troops were scattered to avoid other fronts. Patton used the confusion to his advantage and began an offensive through Operation Cobra. In just two weeks, he advanced 900km to the outskirts of Paris, having liberated much of southern France.

At the end of 1944, the Germans attempted a final offensive in the Ardennes against the weak Allied lines. Patton then made what is known as his best maneuver: he vacated the front to relieve the units under German attack. This provoked a retreat of the German troops. This whole strategy was carried out without the consent of Eisenhower and the Allied High Command.

With the French campaign concluded, he turned his efforts to conquering Czechoslovakia from the Germans. He crossed the Rhine in a couple of months and managed to liberate Pilsen (May 6, 1945) and most of western Bohemia.

The end of the war in 1945 ended badly for the American general, who suffered a serious car accident in Heidelberg (Germany) on December 9, causing serious injuries that led to his death on December 21.

In short, it can be stated that George Patton was a very outstanding general in the military history of the United States. A great strategist and, above all, a great promoter of tanks, he was criticized on many occasions for certain reprehensible actions.

His insubordination and populist speeches caused many people to turn against him. It should not be forgotten that many of his speeches were anti-communist and advocated initiating action against the Soviet Union, something that happened immediately after the war. However, his successes as a military man caused great commotion in the German High Command, disconcerting them with his moves and imposing on them a respect that few Allied generals achieved.