This Day In History: The English Painter Joseph Turner Was Born

Joseph Mallord William Turner, known only by his surname, was a British painter of the 19th century. At the age of 10 he was sent to live outside London, in Middlesex, where he started secondary school. However, he soon abandoned this education. With only 14 years, Turner is accepted as a student at the Royal Academy of Fine Arts.

During his early years as an artist, the young Joseph devoted himself to the production of watercolors. Some of his works were sold to customers of his father’s barbershop; thus, these customers were the painter’s first market.

From a very young age, Joseph preferred to travel and see new lands during vacations instead of returning to his hometown. Already from this time, his fondness for landscapes and natural scenery began to take hold. However, his technique was still very similar to that of other English painters of the time: rather rigid. 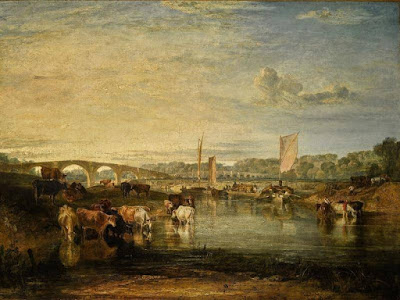 Just before his 20th birthday, in 1794, J. M. W. Turner became acquainted with the works of Scottish painters such as John Robert Cozens. This helps him to broaden his vision of landscape painting and to produce more imaginative pieces. Even by the expectations of the time, Joseph is an exceptional artist. From the age of 21 he exhibits pieces annually at the Royal Academy, an honor reserved for few. Despite this, Turner was never a man of refined manners and bourgeois tastes. He always kept the typical accent of the poor areas of London and did not like to wear the clothes that were considered elegant at the time. Moreover, from a very young age he was a man of coarse manners and brusque gestures. Although critics acclaimed the young painter, some of Turner’s contemporaries mocked him for his stuttering.

Already in J. M. W. Turner’s early works, around 1805, it is possible to see the painter’s original way of depicting landscape. The emphasis on luminosity, atmosphere, and that dramatic, very romantic way of presenting the scenes.

The boundaries between sky and earth in his landscapes become increasingly blurred, and topography is sacrificed to give way to color. The effects of light become the undisputed protagonists of his works.

In 1815, the great Tambora volcano erupted in Indonesia. The volcanic ash affected the entire northern hemisphere of the planet. For at least three years, the sky seemed to be always cloudy and sunsets became brighter. According to research conducted by the Academy of Athens in Greece, it is possible that the colors in the skies of Turner’s works are due to the high level of volcanic ash in the atmosphere. 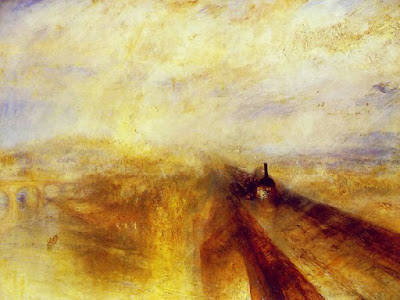 J. M. W. Turner, while painting a large number of pictures, also read avidly. He enjoys Lord Byron and also William Shakespeare. Between 1815 and 1820, Joseph travels through Europe visiting the great capitals of art. His stay in Italy definitely marks his style and his way of painting. After visiting Rome, the color in Turner’s works becomes even purer and brighter.

Turner was always a man who preferred movement and action over sedentary life. For this reason, he constantly sought ways to travel. Over the next few years, Turner would visit a great number of places in England and Scotland to find beautiful scenery. After his father’s death in 1829, Turner would prefer to stay near the English coasts, with their misty colors, wind and gardens.

During his last years, Joseph becomes much richer, more famous and more surly than ever. Increasingly withdrawn and focused on painting as a form of expression, he did not cultivate many friendships.

In 1846, Turner lives in a small house on the banks of a river in Chelsea with a widowed wife. However, he does not stop traveling. After many years of staying in the country, Turner returns to explore Europe. During the last 15 years of his life, Turner produces about 19,000 drawings and paintings.

Joseph Turner dies in Chelsea in 1851, and in his will he donates all his works to the English National Gallery. His works have survived over the years thanks to the efforts of the Tate Gallery in London. 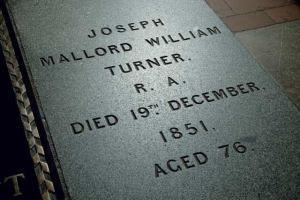 The evolution of colors and light in Joseph’s paintings have served as a basis for several researchers to suggest that the painter suffered from dementia. Experts indicate that the abstraction of his paintings can be interpreted through psychology. However, it may simply be that the colors and diffuse light indicate a vision disorder.

J. M. W Turner was a pioneer in the study of light, color and atmosphere. His works served as inspiration for many French Impressionists. However, unlike the Impressionists, Joseph always believed that it was the duty of art to express subjects of narrative interest. For this reason, Turner’s landscapes are not simple landscapes, they are mythological, historical or literary narratives.